Today’s New York Times carries a front-page piece by James Glanz on the massive energy waste and pollution produced by data centers. The lovely cloud that we’ve all been seeing icons for lately, turns out is not made of data, but rather of smog.

The basics here aren’t very new. Already six years ago, we heard the apocryphal story of a Second Life avatar consuming as much energy as the average Brazilian. That data centers consume huge amounts of energy and contribute to pollution is well known.

On the other hand, Glanz does make a few critical observations. First, much of this energy use and pollution comes from our need to have data instantly accessible. Underscoring this, the article ends with the following quote:

Second, much of this data is rarely, if ever used, residing on unused, “zombie” servers. Back to our Second Life avatars, like many of my readers, I created a few avatars a half decade ago and haven’t been back since. Do these avatars continue consuming energy, making Second Life an Internet version of the Zombie Apocalypse? 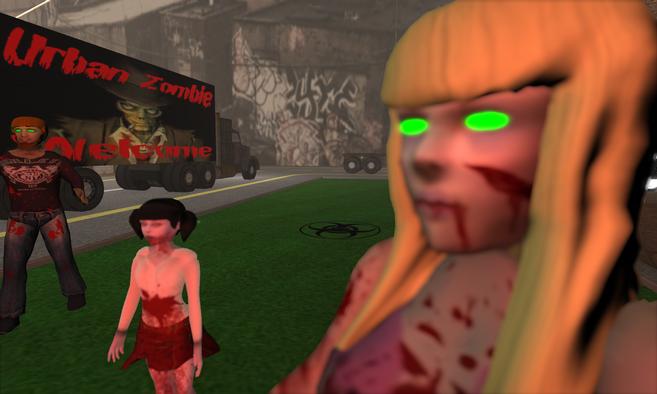 So the ideology of automobliity—that freedom consists of the ability to go anywhere at anytime—is now reborn, in zombie form, on the Net. Of course it also exists in terms of global travel. I’ve previously mentioned the incongruity between individuals proudly declaring that they live in the city so they don’t drive yet bragging about how much they fly.

For the 5% or so that comprise world’s jet-setting, cloud-dwelling élite, gratification is as much the rule as it ever was for the much-condemned postwar suburbanites, only now it has to be instantaneous and has to demonstrate their ever-more total power. To mix my pop culture references, perhaps that is the lesson we can take away from Mad Men. As Don Draper moves from the suburb to the city, his life loses its trappings of familial responsibility, damaged and conflicted though they may have been, in favor of a designed lifestyle, unbridled sexuality, and his position at a creative workplace. Ever upwards with gratification, ever downwards with responsibility, ever upwards with existential risk.

Survival depends on us ditching this model once and for all.