Note: fabric | ch, one of our partner on this project, has developed an open source data sharing tool that tries to simplify the procedures of declaring/logging and sharing data (from “connected sensor things”, mainly). This is Datadroppers. The service is somehow similar, yet slightly more versatile than the now vanished Pachube, or the contemporary, but proprietary, Dweet.io (that we’ve already mentioned in the resources section of this blog).

One of the interesting points in this case is that the new web service has been created by designers/coders that are themselves in need of such data service for their own work, promising in some ways that it won’t be commodified.

The other interesting point is the fact that they are formally involved in this design research project as well (through Christian Babski, developer), which should help us match the functions of Datadroppers with OwnCloud: through the use of the documented OwnCloud Core Processing Library and the one of Datadroppers, new paradigms and artifacts in file/data sharing and cloud operations could be envisioned, implemented and tested.

But moreover and mainly, projects made by the design community could be developed that will take advantages of the open resources of Processing (later on, Javascipt as well), OwnCloud and these libraries. Designing tools remains one of the goals of this design research project. Designing artifacts that will use these (improved) tools will be the work of the coming year in our design research… 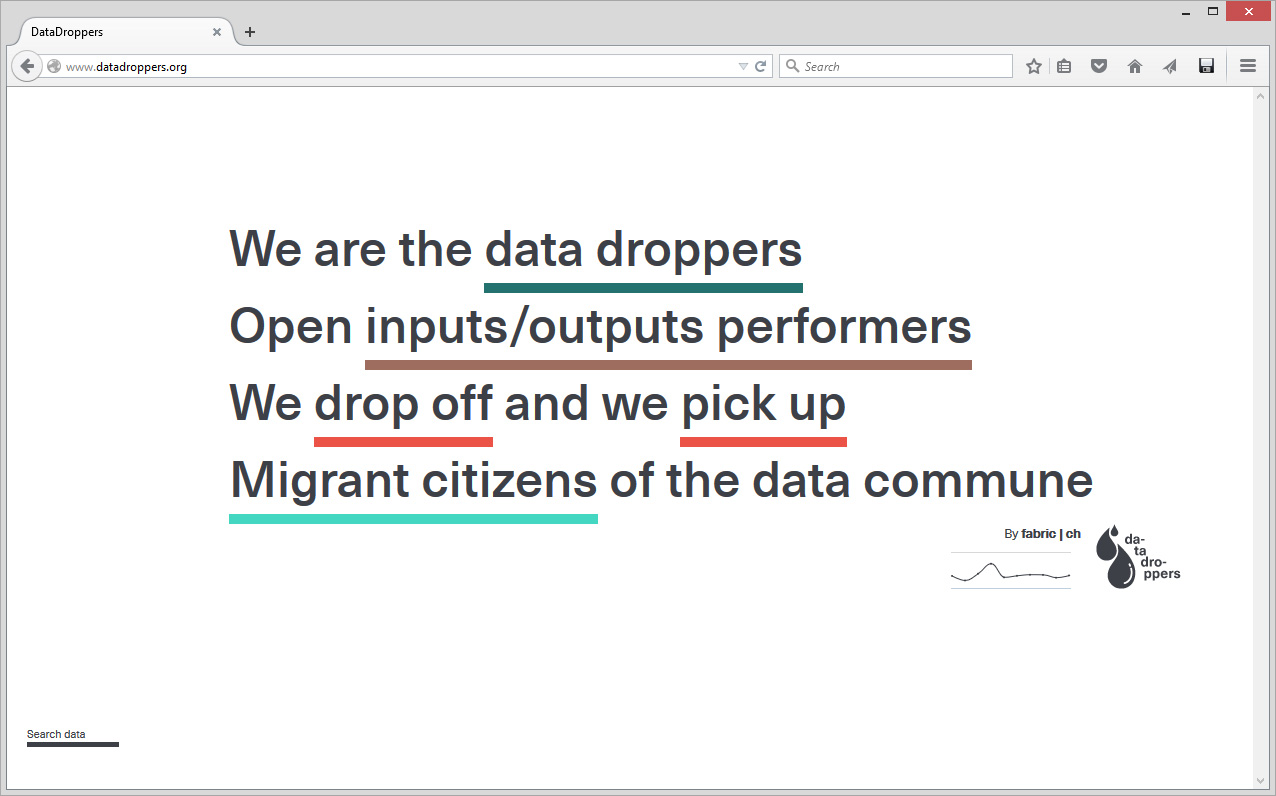 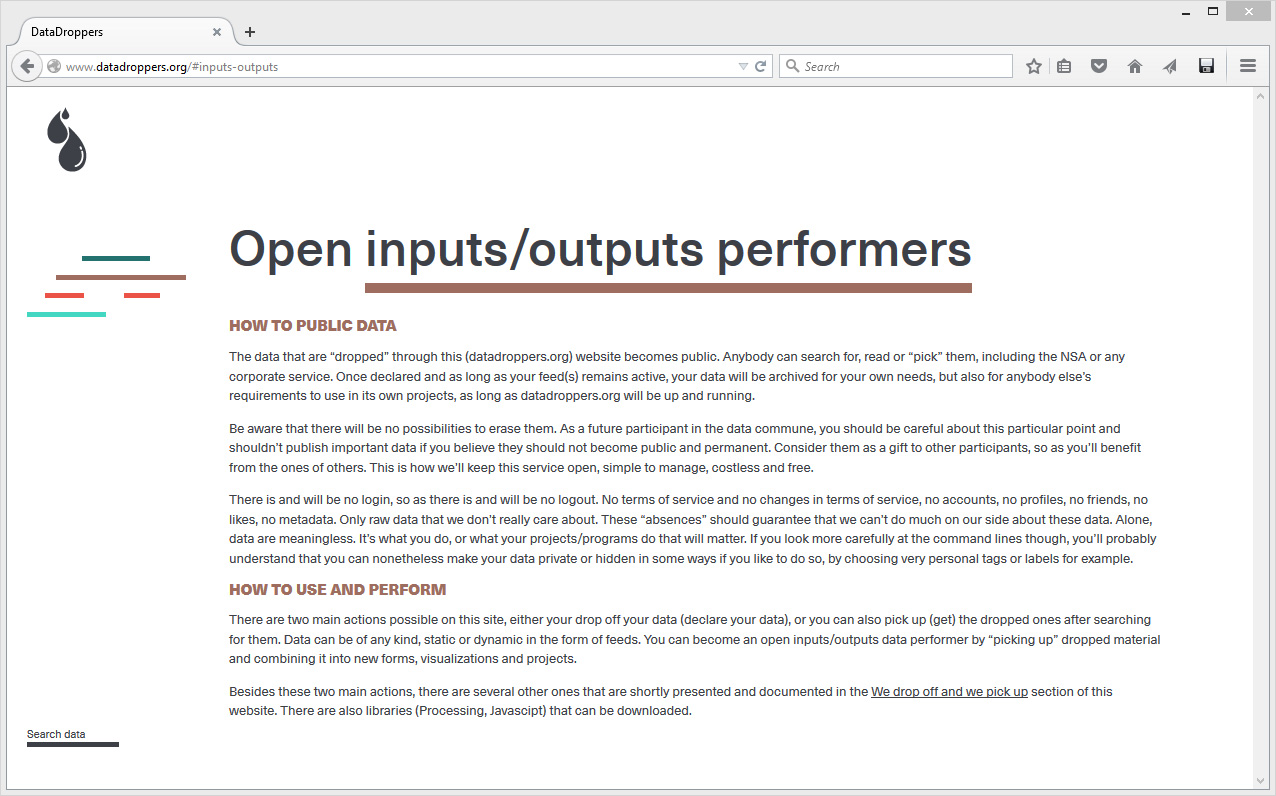 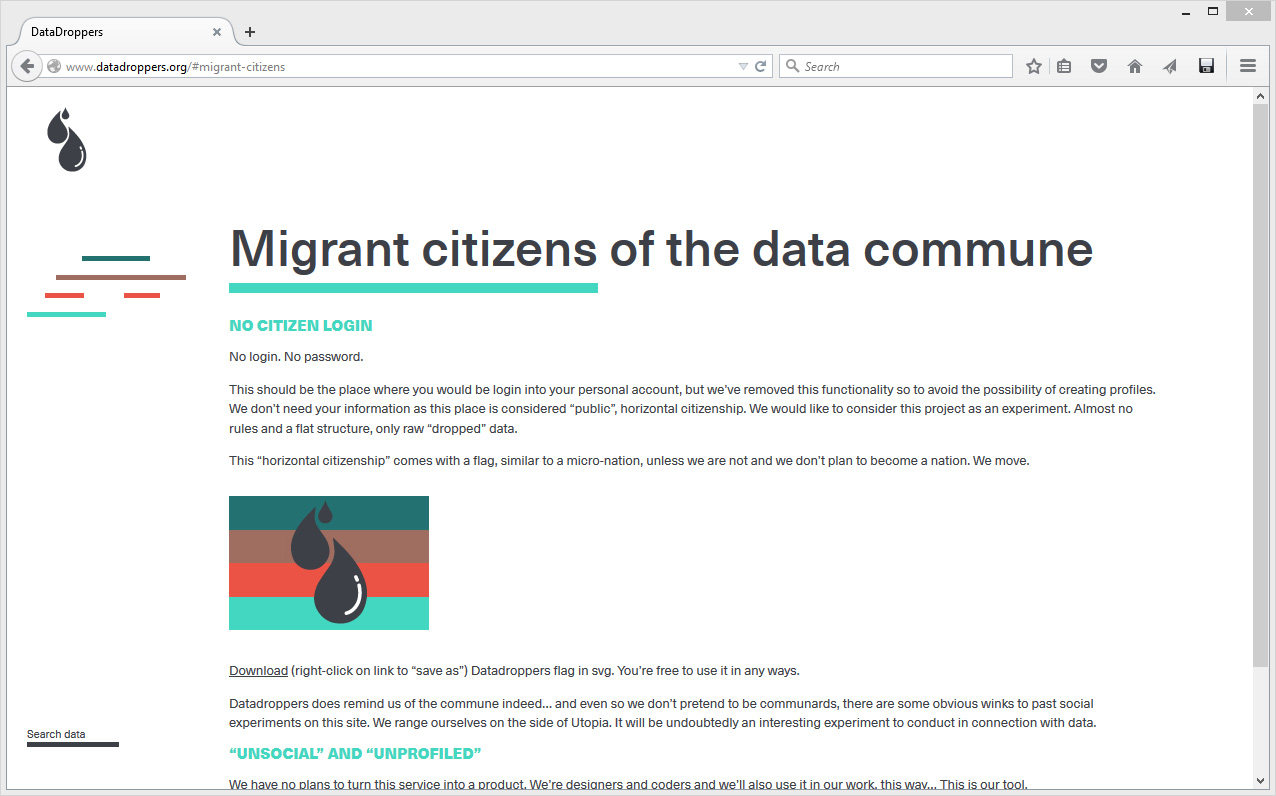 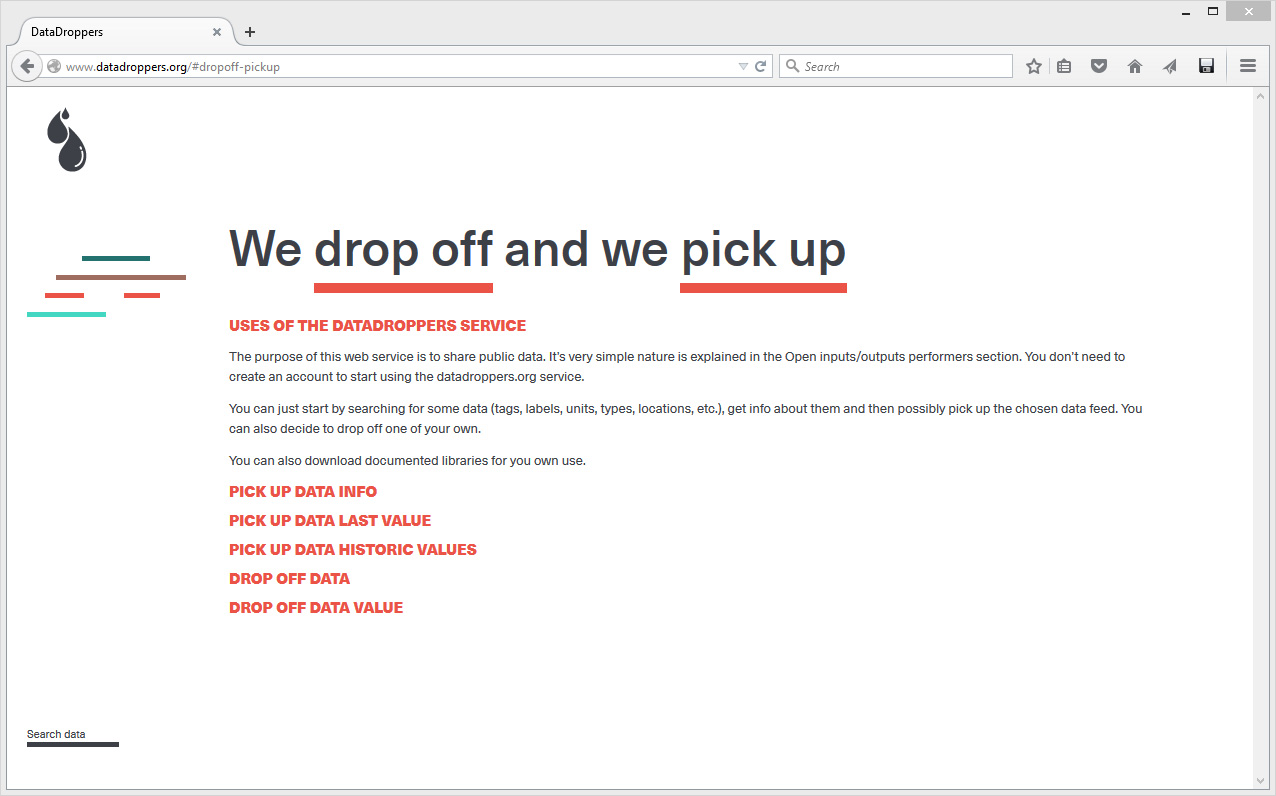 The “communal service” is in fact a statement, the statement becomes the navigation interface. The two main sections of the website are composed by the parts in which you can play with or search for data.

We drop off and we pick up is the area where one can see what can be achieved with data. Obviously, it is either possible to declare (drop off) data and tag them, or retrieve them (pick up) – image above -. You can also Search data following different criteria -below-. 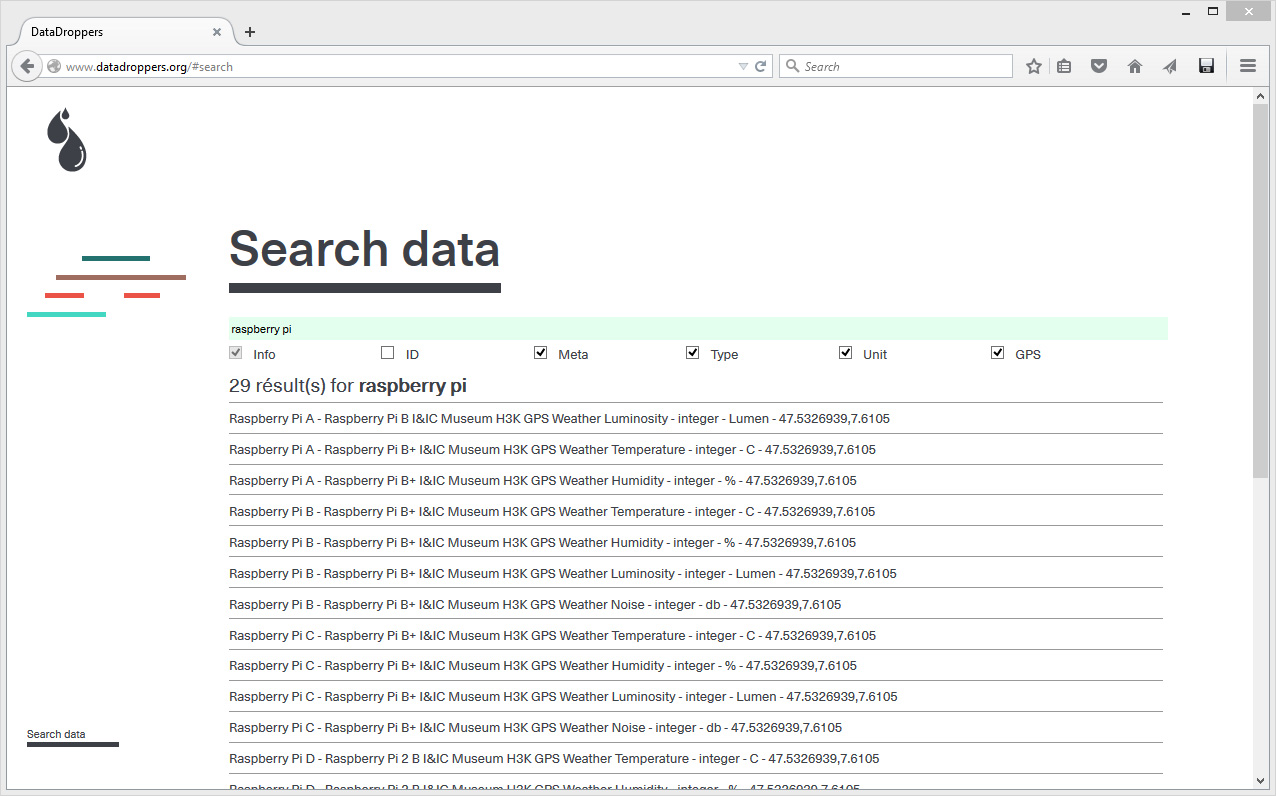 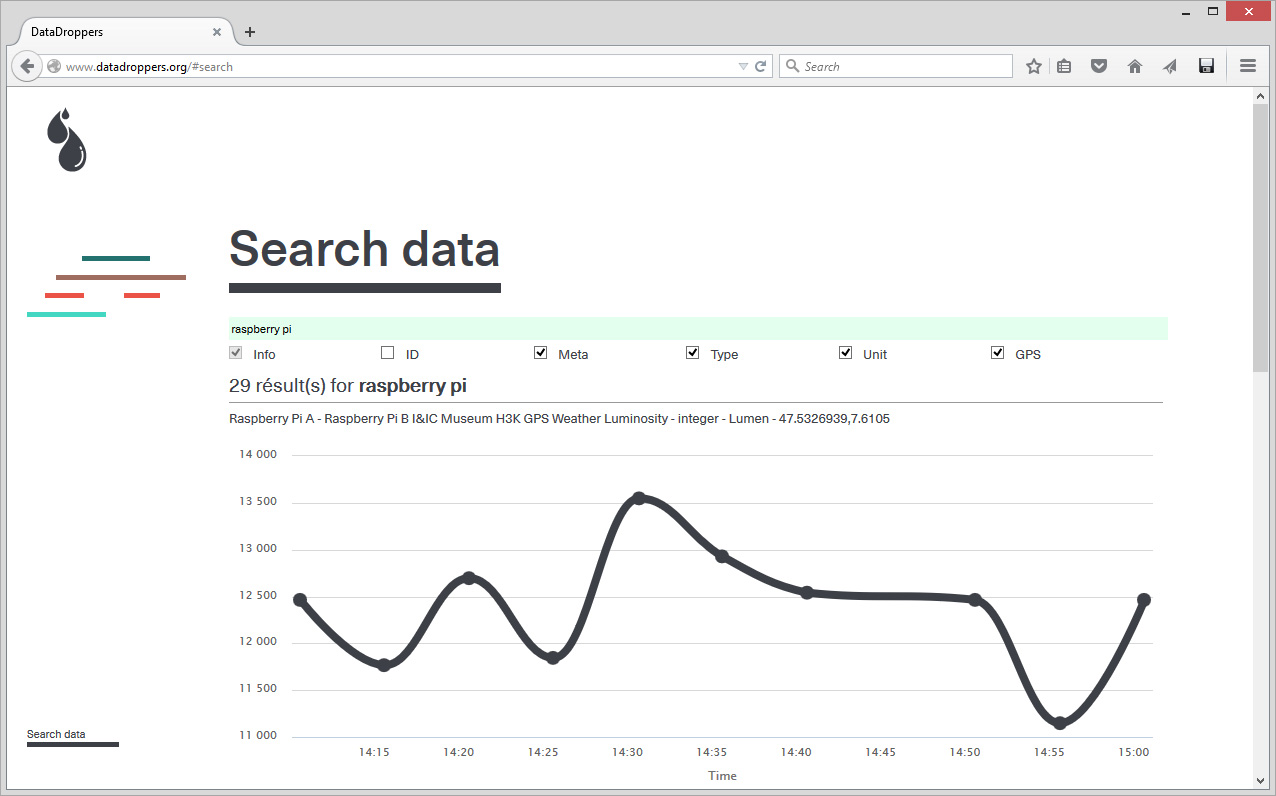 Usual data will certainly be live feeds from sensors, like the one in the top image (i.e. value: lumen). But you could go for more interesting or unexpected things, either when you’ll create data or when you’ll use them. The two images above are about “curiosity” data. They were captured within an exhibition (see below) and are already partially interpreted data (i.e. you can leave a connected button with no explanation in the exhibition space, if people press it, well… they are curious). As another example, we also recorded data about “transgression” in the same exhibition: a small digital screen says “don’t touch” and blinks in red, while an attached sensor obviously connected to the screen can indeed be touched. Childish transgression and slightly meaningless I must admit… It was just a test.

But you could also declare other type of data, any type, while using complementary tools. You could for example declare each new image or file within an open cloud service and start cascading things. Or you could start thinking about data as “built” artifacts… like we did in a recent project (see below, Deterritorialized Living) that is delivered in the form of data.  Or you could also and of course drop off static data that you would like to store and make accessible for a larger community.

Possibilities seems in fact to be quite large. 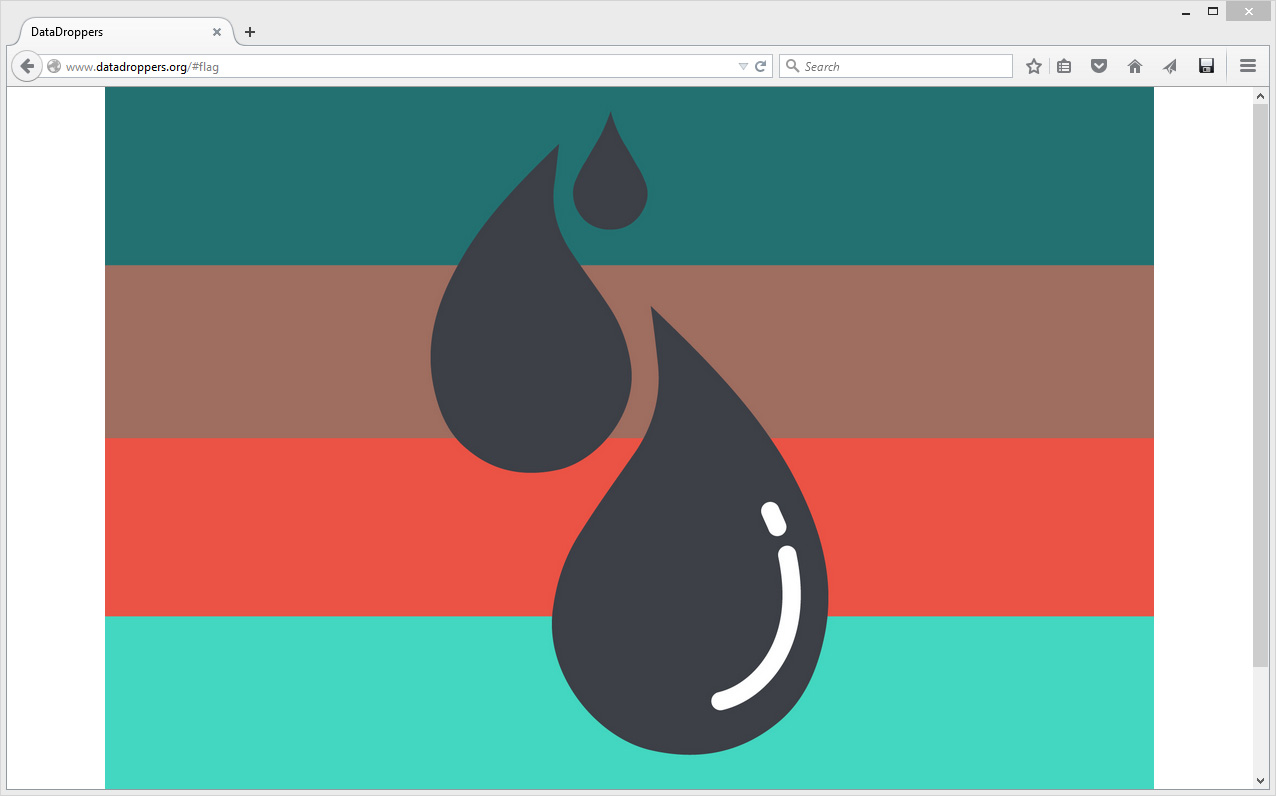 Datadroppers as a commune could even be considered as a micro-society or nation. It comes with a dowloadable “flag”, if you desire to manifest your attachment to its philosophy or plant it in your datacenter! 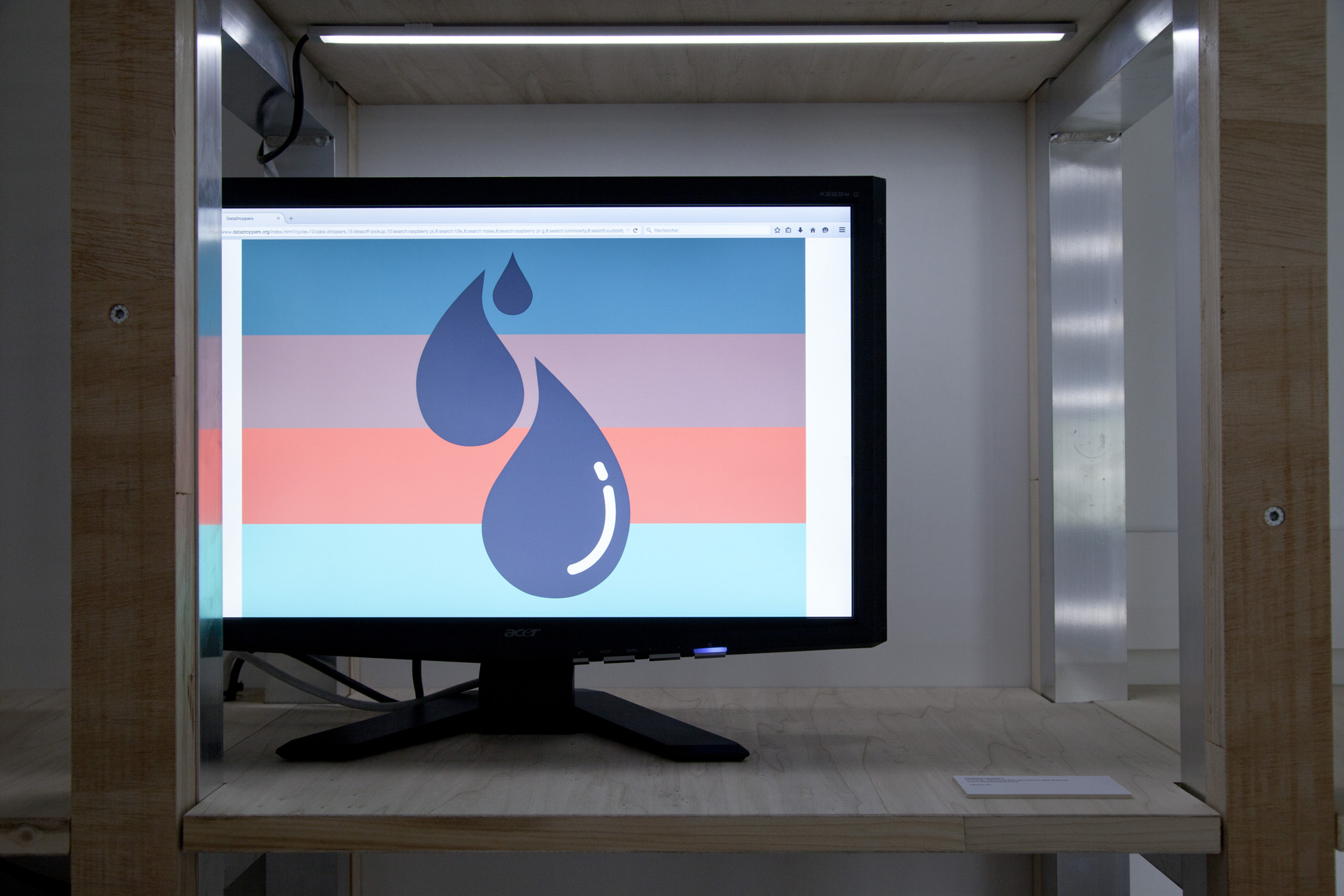 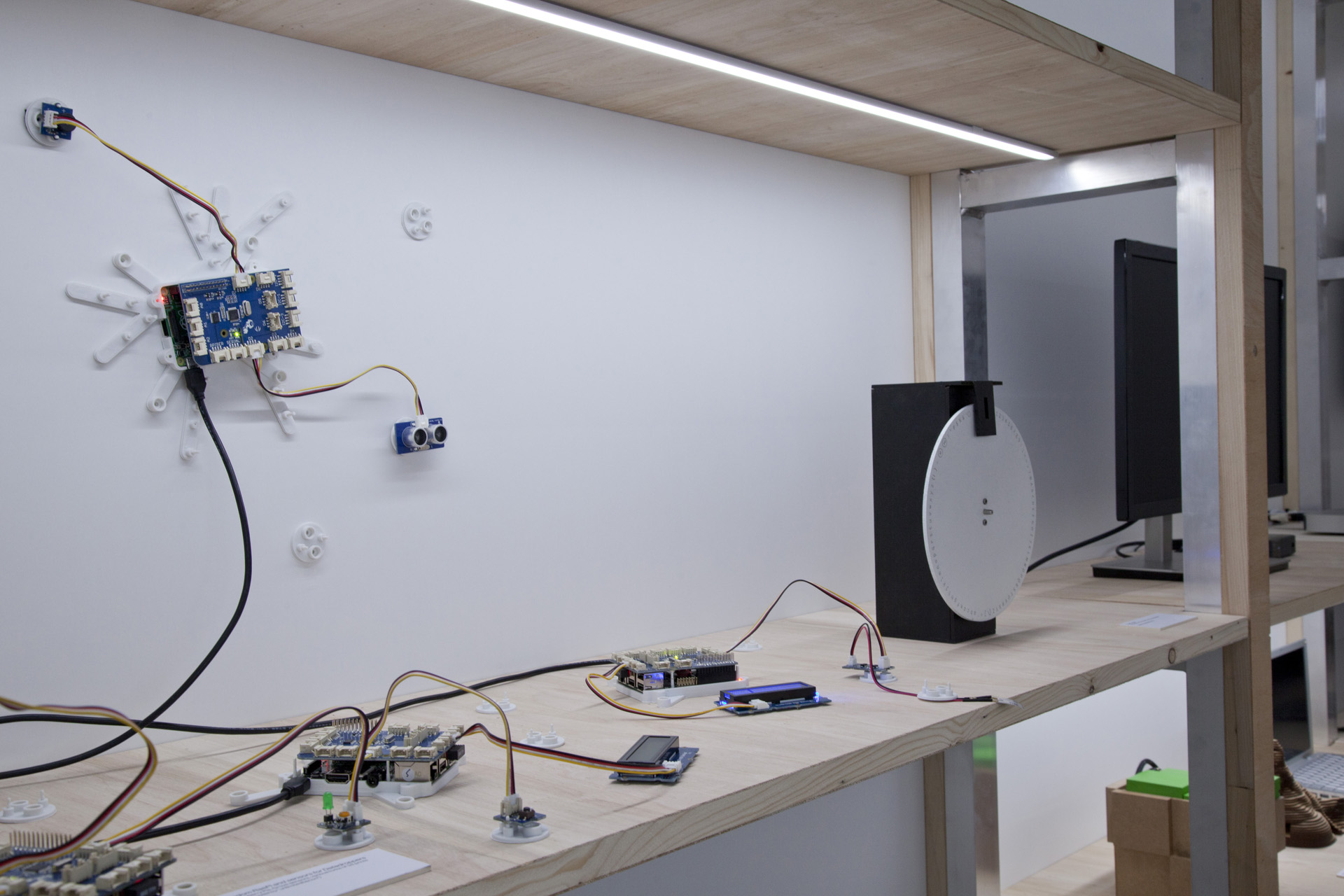 Some views of Datadroppers in first use during Poetics and Politics of Data exhibition at the Haus der elektronische Künste in Basel (Switzerland), as part of the scenography designed by fabric | ch. Many Raspberry Pis were installed inside the space that captured exhibition’s data and feed the service. They can now be retrieved from http://www.datadroppers.org/index.html#search as the exhibition will end this week-end > search with string “H3K” or “Museum”. 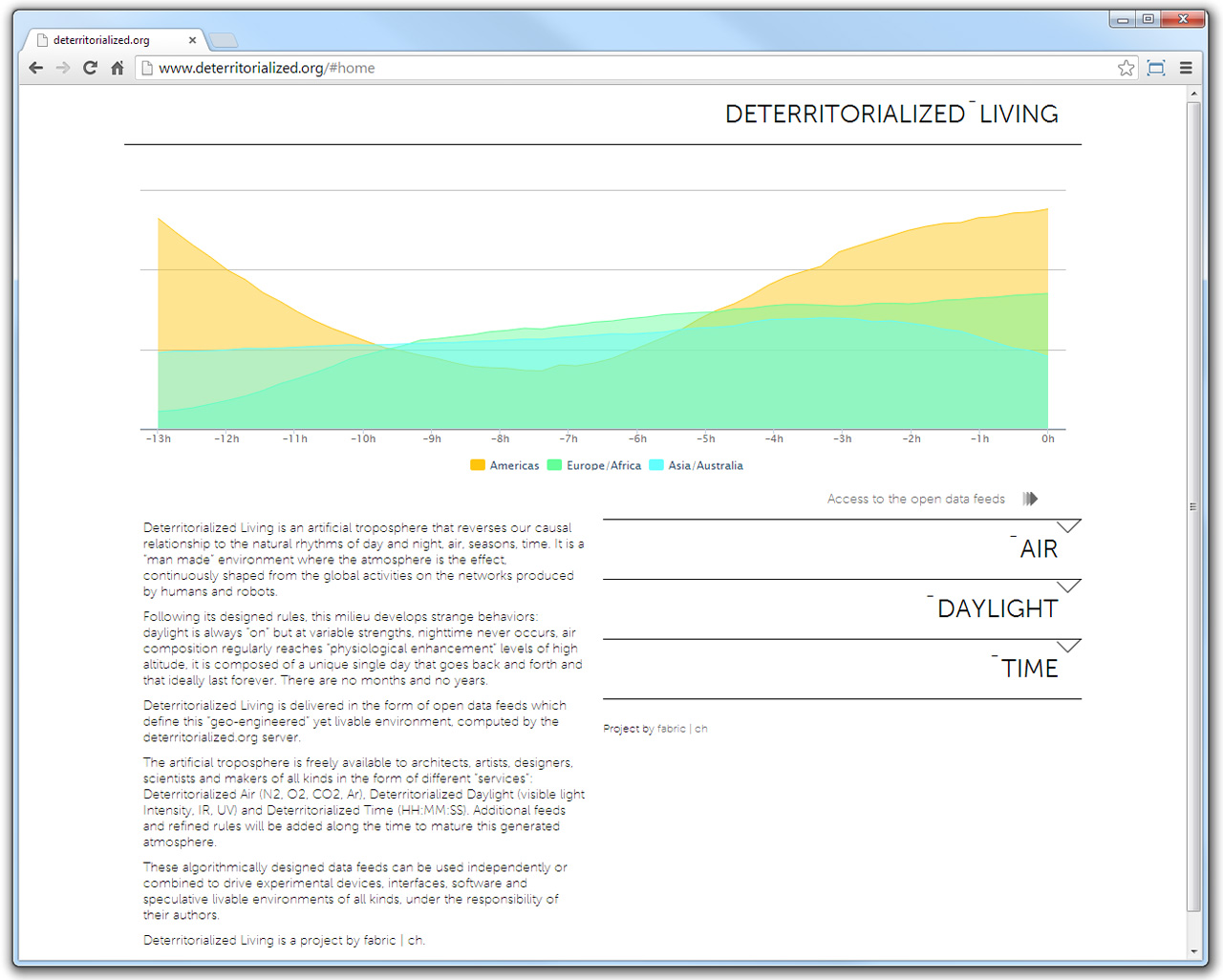 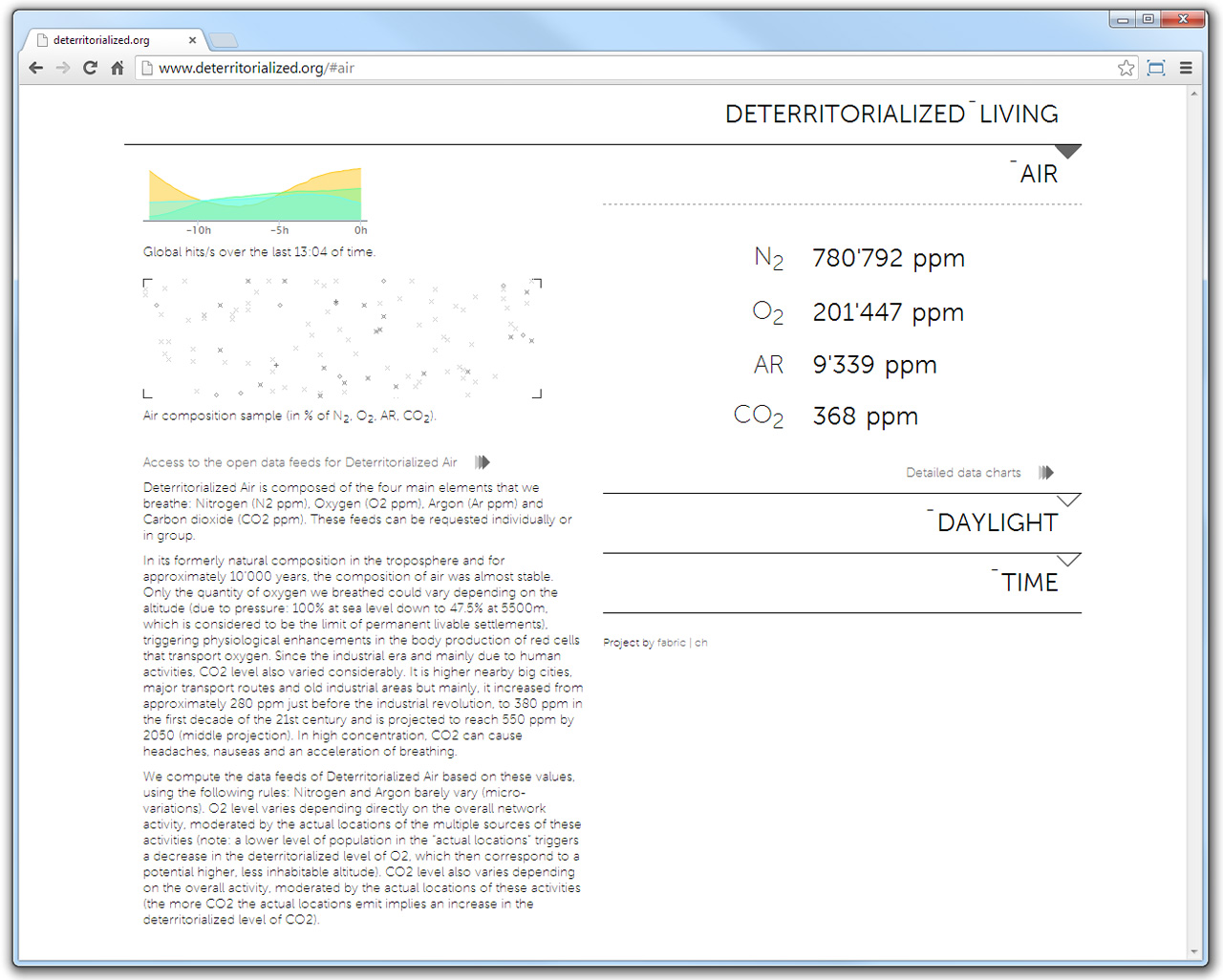 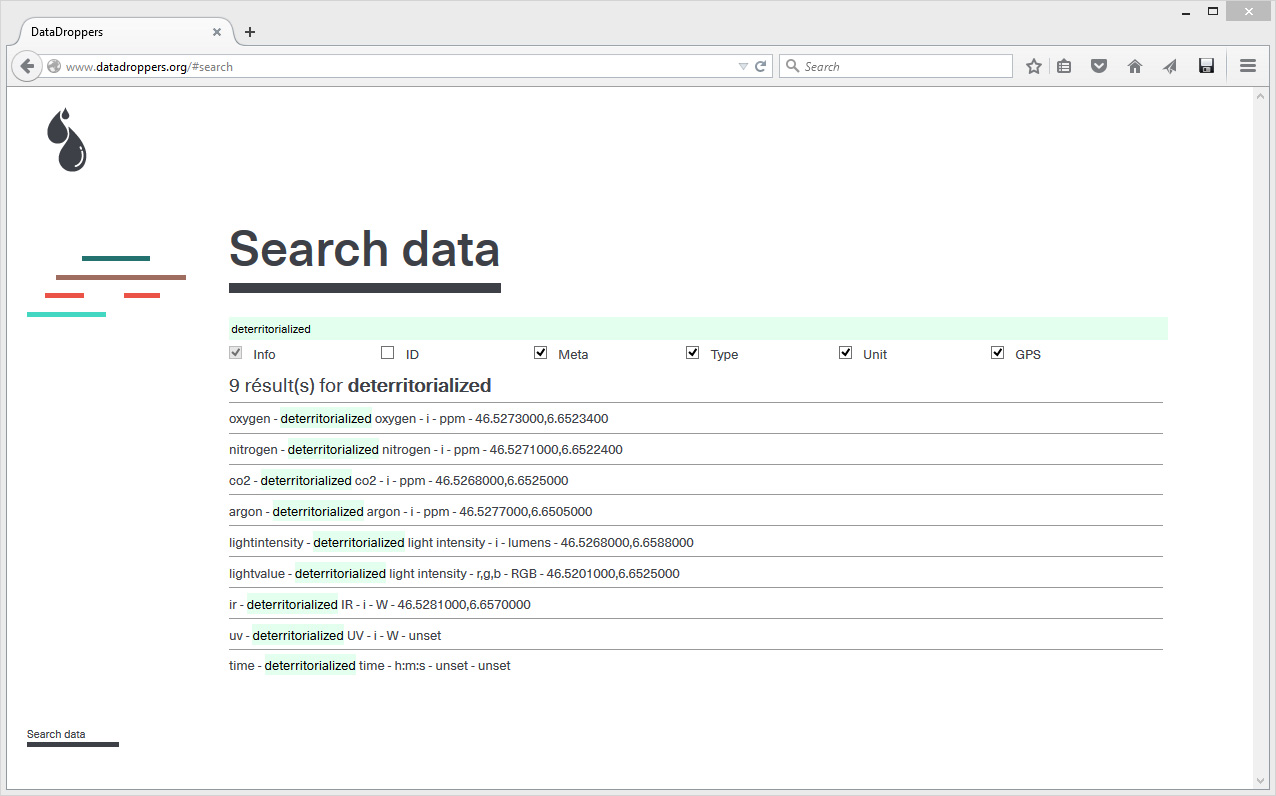 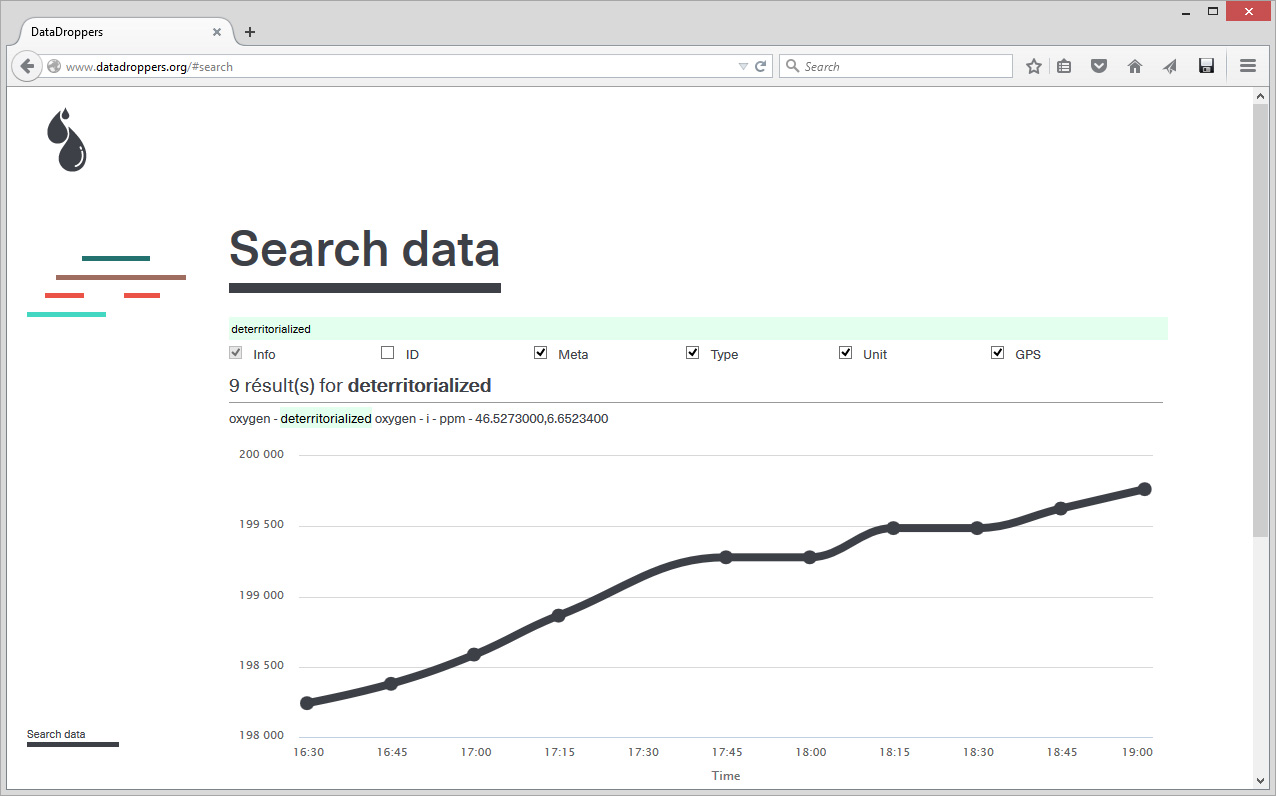 Finally, I must mention the project that initiated Datadroppers, both because we developed the rules of the data sharing service during this latter project (Link > follow “Access to open data feeds”), but also because it is probably one of the most interesting use of Datadroppers so far…

Deterritorialized Living is an artificial, yet livable troposphere that is delivered in the form of data. Just like if we indeed install atmospheric sensors in a real environment, unless the environment doesn’t exist in this case (yet), it is the project. The process is therefore reversed within this almost geo-engineered climate that follows different rules than our earth/cosmos driven everyday atmosphere. We have the open data feed to later set it up. fabric | ch or another designer as the feed is open. We plan to use this feed and materialized it through different installations, like we already started to do.

So, for now, this fictive data flow of a designed atmosphere is also delivered as a feed (again: Search data > Deterritorialized), among other ones (some “real”, some not), within the webservice offered by Datadroppers .